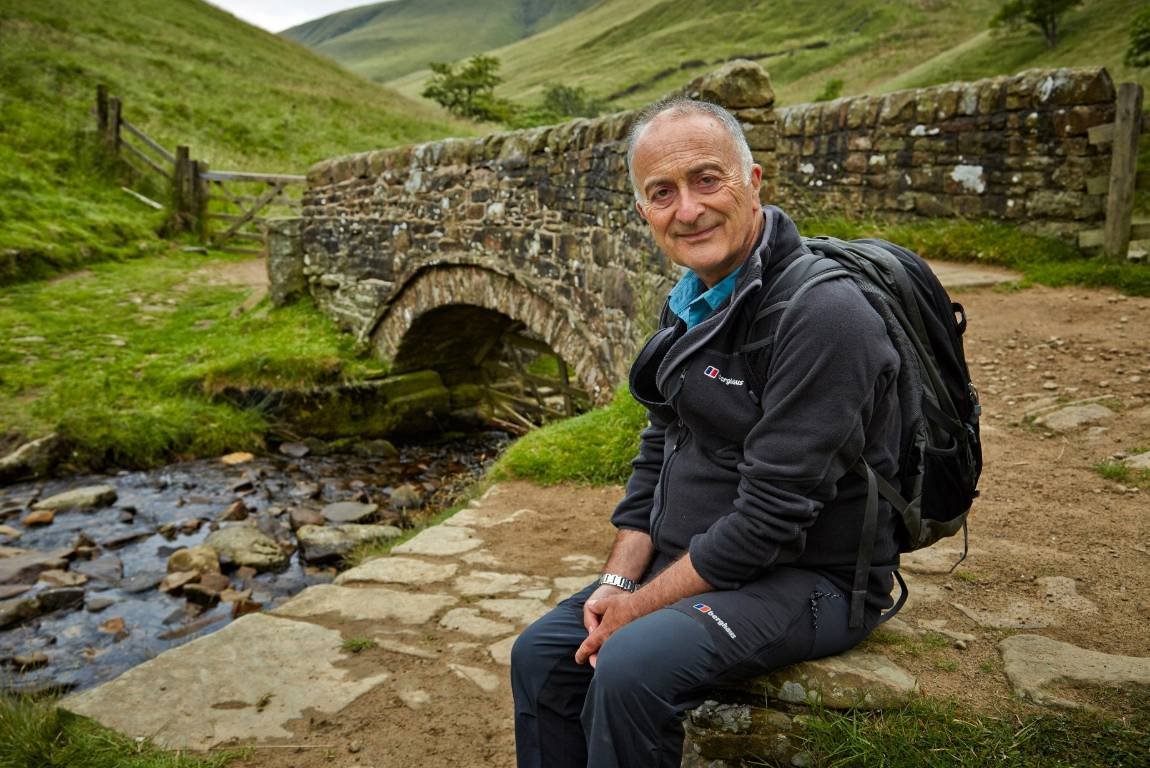 I actually started writing this article to talk about famous long distance walkers, but after writing, I looked down the list and realised that everyone here is famous and hikes long distance trails.

Well, I’m not going to undo a few hours of research and writing, so I’ll go with what I’ve written and perhaps save my ‘Iconic Long Distance Hikers’ article for another day, as perhaps that will be more fitting for the John Muirs and Alfred Wainwrights of times gone by who deserves a place on that table.

So the list below is more of a celebrity round up of folks who hike. Some of which are obvious (Billy Bryson), and some less so, such as Sir Tony Robinson.

I wasn’t sure whether to start with Alfred Wainwright or Billy Bryson. I decided to start with Bill because I like Alfred but Instagram has made me sick to death of hearing about Wainwrights.

Mr Bryson is an American/British author. Bill Bryson, known for his Book and accompanying TV show Notes From A Small Island, also walked the Appalachian Trail. On the back of his walk, he also wrote the book A Walk in the Woods, with a 2015 film where he was portrayed by the actor Robert Redford.

This all said, Bryson doesn’t really consider himself a walker, and says that his discovery of walking came out of living in Britain and doing some weekend walks in the Lake District National Park.

Clare Balding off the tele, and radio (Radio 4) is also a walker!

She hosts a cult Radio 4 show called Ramblings, which has become quite popular with walkers. This is not without a natural interest in walking herself, and Claire has walked the South West Coast Path in steps, and the Dales Way and has walked 1,500 miles of footpaths on her show, and many more beyond that.

Stephen Amos is a British comedian, and occasional TV personality. He also walked the Camino as part of a TV show, so he makes the list as he did actually walk it.

Stephen wasn’t a walker to begin with, but would consider doing another long distance walk in the future, but perhaps with a king size bed each evening.

Nicholas Crane is best known as a witer and broadcaster, and has presented television series such as Coast, Great British Journeys, Map Man and Town.

In addition to the remarkable amount of awareness he has raised for our countryside, and natural places, he also makes the list as a long-distance hiker for traveling for 18 months, walking 10,000 km from Cape Finisterre to Istanbul. This journey was documented in the book Journey to the book Clear Waters Rising: A Mountain Walk Across Europe, in addition to a TV documentary called High Trails to Istanbul (1994)

Fields of Wheat aside, the former Tory Prime Minister Theresa May, is also a keen hiker, and long distance hiker, having completed long distance walks in Switzerland.

That being said, as a former prime minister, whose personal schedule was not openly shared, it’s been difficult to find a list of walking trails walked by Mrs May. If anyone knows, of any, give me a shout.

John Noakes, known perhaps to Boomers as a presenter for Blue Peter, flippantly gifting Blue Peter Badges to little Bridget and Tommys for sending in badly drawn pictures, or for being lucky enough to turn up at the studio. I never got a Blue Peter badge. Resentful, me? No…

Noakes, also walked the Pennine Way, with his dog Shep, and turned it into a documentary called Go With Noakes, which aired in 1977. That was before I was born, so I don’t remember it.

He also got lost walking in Mallorca, but, fortunately, was found unharmed.

Sir Tony Robinson, best known as Baldrick from the iconic show Blackadder (has this been canceled yet?) and later presenter from the Archelogy show Time Team is also a keen long distance walker. He has naturally made TV shows about long distance walking, such as his Documentary Coast to Coast, where he walked the.. Yea you get it.

He has also walked other trails such as the Abbots Way, and Tudor Way amongst many others, personally and for TV.

You will probably recognize Kate Humble from the likes of Countryfile and a tonne of documentaries. I couldn’t work out whether Kate had actually walked any long-distance trails from my research, however, she has done a lot of walking along coast paths for various documentaries and tv shows, so she makes the list.

Enjoy the list? Have any recommendations on Famous Long Distance Walkers? Let me know and I’ll happily add them to this article.

You've unlocked a 10% coupon!
Thanks for reading. You have unlocked a new coupon to use on the Distance Hiker Store! Be quick. It expires in 24 hours!
bbarfyj8h0

This site uses Akismet to reduce spam. Learn how your comment data is processed.